About a month ago, we began in earnest the second development stage of our new show, Avalon. We’ve been making this show for a while now but in a very real way, we are now actually making the show. The more than a year of batting around ideas and concepts, developing puppet designs, writing script treatments and then first and second drafts of said script is all work, for sure. That is especially true when you are doing (as we have been) that work around other projects and gigs and the things one does to pay the rent. We spent April, however, Making The Work.

Probably, that last idea did not need to be capitalised, but having spent the better part of a month either in a rehearsal room or at my computer re-drafting the script, it has begun to feel like the kind of process that demands to be capitalised when you write it down. I am only exaggerating a little bit when I tell you that we spent almost all of our waking hours that were not otherwise committed to keeping ourselves afloat thinking about Avalon; about its characters (both human and puppet) it’s story beats and visual style, it’s identity as piece of art. We started looking at it from a lofty height and very quickly we descended to the lowest, most granular levels we could, so that we could understand the things we had already made, and break them. Then we put them back together.

That’s how pretty much every creative process I have been a part of has gone; you make something, let’s say you write a script, and then you give that script to actors and they read it, and then they perform it, and in the hearing of it aloud you discover all of the failings it has. You discover that certain lines are clunky and hard for an actual human being to say out loud. You discover places where the characters sound fine, but not like themselves. You discover that the big speech that you loved when you wrote it is easily three times as long as it should be. Then, when you’ve learned those things, you tear it all apart and re-build it, and in doing that you make it better. Then you do it again, and again, until you can’t make it any better.

Knowing that this is how it is going to go, that this is always how it goes, makes it a lot easier. It’s almost tired now to say that ‘writing is re-writing’, but it’s also true that almost nothing is done after one attempt. Even still, it can be startling how many great deficiencies in an early draft can be utterly invisible until another artist looks at or starts to play with something. I knew going into our rehearsals that though we had a full draft of a script, it was far from finished. Something was wrong with it, probably several things, but I could not put my fingers on precisely what that was. By the end of the first day we had figured out 1) that the script was *far* too long, and needed trimming, 2) that one of the three principal characters was falling very flat and that her vocation, which had become her defining trait, was making it difficult to flesh her out and 3) that the various relationships needed developing. So, we tore it all apart and re-built it, and focused down on the first half (and eventually first third) of the script so that we could edit and re-edit the text until we got the opening into a place we were happy with and could then continue to build from.

Two days later, and I had a new first half, and it was clearly a much better section. By the end of the month we had what felt to me to be a much improved ‘act one’ (side note: Avalon is a one-act play, intended to run at about an hour with no interval once we are done. That does not, however, stop me thinking about its structure in three ‘acts’). The metaphor of tearing things apart and re-building them is something that has always seemed to be an obvious and sensible one to me for describing the creative process. It takes on a different dimension however, when making a show full of puppets.

After the first few days or working solely on the script, we got the first prototype puppets in our hands. And we knew that we would have to be problem solving the objects and the text in tandem, in order to make this work. So, we played with the puppets and found out what wasn’t working for us, and then latterly, rather than metaphorically, dismantled and rebuilt them – sometimes dramatically, sometimes by simply making minor modifications. We trimmed control rods, cut new access points, and even stitched together a whole new puppet for the lady of the lake. Making scripted puppet work is an odd process, at least for me. The script is necessarily impacted by the puppets and their capabilities, character, and designs as much as the puppets are impacted by the script. So, we iterated on both things, back and forth, to try and bring them into harmony.

And finally, at the end of the period, we shared what we had made with an audience of friends and strangers. The feedback from that sharing was excellent, and the value of being able to have conversations with that audience afterwards was certainly valuable. We have learned so much about Avalon, and pushed it forward so far but there is of course plenty of work left to do: the rest of the script to re-build, more puppets to build, and more rehearsals to do. We need some time to reflect on what we’ve learned so far, and how best to take the next steps, but I am very excited about what is to come for this project. We hope you all are too.

Yesterday, there was a meeting. Tomorrow, there will be another meeting and between the meetings and the company development and performances we are attempting to make a new show.

It’s all a bit wonderful, being this busy.

But I am perhaps getting ahead of myself! We have not yet properly announced the show that we have bubbling away in the background, so perhaps I should introduce you to it. You may have seen or heard rumblings on our Twitter or Facebook accounts but for those who haven’t, or are all a bit confused about it here’s the deal:

We are currently in the process of writing a new, one-act puppet play. It’s about King Arthur – sort of. It’s also about identity and story-telling and memory. Unlike our last show, it is aimed at older audiences, and is going to run close to an hour than the 20 minutes or so that our outdoors work has typically lasted. Frankly, we are all very excited. We’ve been chatting about this, doing the concepting work and plot development for several months now and very soon I’ll be sitting down to hash out the first draft of the actual play script and that day can’t come soon enough. We’ve all had this story zipping around in our heads for a long time now, and for my part at least, punching out the actual dialogue will be the first time it really starts to take shape as an actual play, and not just a neat idea we’ve had.

Yesterday’s meeting was one of the more exciting ones in a while. I’ve lately been working on the ‘treatment’ for the script – a document that describes what happens in the play, scene by scene, in detail. It’s kind of an extended synopsis of the show and lets us draft and re-draft the plot very quickly without having to write or re-write pages and pages of dialogue. Once the treatment is finalised I’ll then get to work doing the first full draft of the script. Yesterday I and our Technical Director Tom sat down with the current draft of the treatment and worked through what we needed or would like to be doing with our puppets in each scene so I could finalise the treatment.

Much like Caliban in the Rock pool, this new play will be a show with both human and puppet performers in it, so figuring out which moments need or want puppetry, and where to make those moments spectacular or understated has proven quite the challenge to hash out, but I think we’re finally getting there. I’m really looking forward to having more to show you all about this show over the coming months including, hopefully, an actual title!

These blog posts too will hopefully be more frequent over the coming months as we push forward with this new show, and continue to pursue new opportunities for Caliban. I can’t wait to see what’s ahead of us!

A couple of weeks back we had the pleasure of bringing Caliban in the Rock Pool to Coventry to be a part of the cities Shoot Festival. A day long arts festival celebrating local talent from around the area it was crammed with a really diverse range of forms including theatre, comedy and music. We started the day off at 12:15 and then spent the rest of our day trying to see as much of the festival as we could, and chatting to other performers and audience members between shows. The whole event took place at the Shopfront Theatre in Coventry’s city centre and was an absolute delight to be a part of. I’ve popped a gallery of some of my favourite pictures from the event down below. You can learn more about Shoot Festival, which was in its third year this year, at their website here. 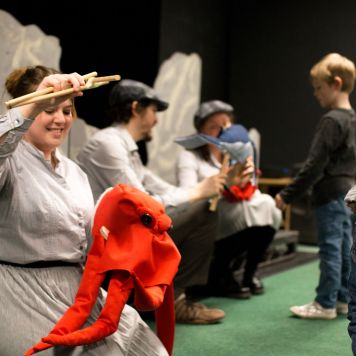 Bootleg Puppets is a theatre company based in the West-Midlands. We brought Caliban in the Rockpool to the Startford On Sea festival (July 2016), and to Coventry's SHOOT Festival on the 18th of March (2017). We are working on ways to bring it to audiences elsewhere around the UK.